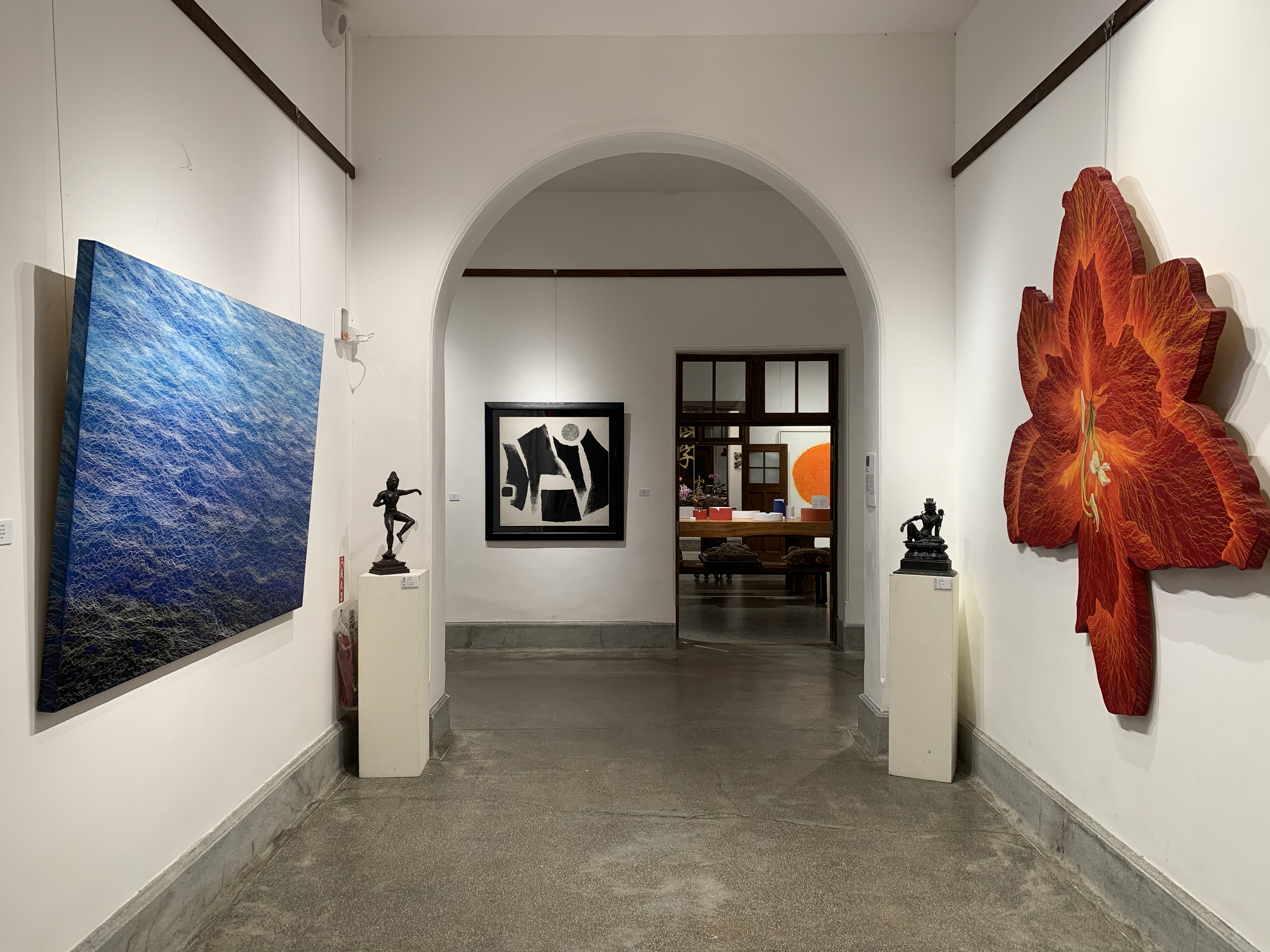 An exhibit at the former Japanese Naval Guesthouse in Taipei, now an art gallery, featuring work by Taiwanese artists alongside artifacts from South and Southeast Asia.


I was recently quoted extensively in this Hong Kong Free Press article about the ongoing fight for dual nationality in Taiwan. I think overall the piece is quite good.

The article covers some important points: even people born here to parents who don't have Chinese or Taiwanese ancestry can't get dual nationality. There is simply no pathway. Until just a few years ago that meant potentially being forced to leave the only country you've ever called home because there was no visa available. Now, that issue's been somewhat addressed by allowing such children to get permanent residency. Other streamlining has occurred, which helps, but still doesn't -- and can't -- address many key issues.

We can't vote, usually get turned down for anything requiring a credit line, and aren't eligible for any number of benefits that will likely grow more necessary as we age (a lot of senior citizen benefits are not available to us regardless no matter how long we've paid taxes). Our ability to be fully included on the labor insurance pension plan was only recently instated, as well.

However, there are a few things from my interview that didn't make it in, and I'd like to discuss them here.

It's been pointed out that the piece ignores the Southeast Asian community, and yes, it does. I brought up the issue of foreign blue-collar labor, not because I think I can speak for anyone, but because I was being interviewed. That segues into my first point.

Many people note the "double standard" of Taiwan's nationality laws: most countries either allow everyone or no one to have multiple nationalities. In fact, it's a quadruple standard.

People with the right ancestry can have multiple nationalities without issue. People with so-called "elite" jobs can get dual nationality. People like me can get permanent residency but not dual nationality. And treated worst of all, blue-collar foreign workers (who make up a large percentage of the Southeast Asian immigrant community) have no access to permanent residency, nor do labor and residency laws protect them adequately.

This is both racist and classist on the part of the Taiwanese government. Although there are explanations for why the piece focused on APRC holders, it would have been good to include a section on the extra barriers that exist for most immigrants to Taiwan, with a related interview.

My second point is related: it creates a system where your human worth is tied entirely to your job. But, as Preston points out in the article, being a good citizen is about more than what job you do, and it's a bit of a straitjacket to insist that "worthy" people must hold a narrow range of positions:

“They’re using it as a rewards system....It’s basically a very exclusive club, but there’s more to good citizens than just being an elite member of society."

It stifles the sorts of contributions that may be good for Taiwan, but don't come with a specific title attached.

It's also a reminder to those of us who have APRCs that consistently advocating for and supporting immigrant communities with less privilege is important.

The truth is, even if I get a PhD someday, I don't particularly want to be a professor -- the job I would need to qualify. I think my personal contribution is more impactful as a teacher trainer, because I work with local teachers, who can then do what they think is best with their professional development in their context.

The usual comeback to this is that "the government chose to incentivize the sort of people it wants to immigrate". Okay, but that's still a "you are only worth your job title" attitude, and in any case, the government has also been saying that it wants qualified teachers and teacher trainers for it's EMI/CLIL-based initiative to improve English language proficiency. In other words, I am exactly the sort of person they say they want. Beyond that, while the government may not say they want blue-collar labor, such labor is vital to Taiwan and they know it.

Another rejoinder I often hear is that Taiwan is a "monoculture", it's not a place where anyone from anywhere could potentially come to call themselves Taiwanese. I will leave aside the "being Taiwanese" aspect, because even if I get dual nationality someday, I don't intend to call myself that. I do think the term still has cultural connotations that just don't apply to me.

There are two things wrong with the "monoculture" argument. First, the original citizenship law was written in China in the 1920s. It was never intended to apply to just Taiwan, and certainly wasn't tailored to or even appropriate for any concept of Taiwan as a nation. Now, the vast majority of Taiwanese either identify solely as Taiwanese, or prioritize Taiwanese identity. There is a distinct sense of a unique Taiwanese culture, heritage and history, separate from China. As Kerim noted:

As a researcher of Taiwanese indigenous culture and languages, Friedman said there was also an ideological reason for allowing more foreigners to hold dual citizenship. “I would very much like to see Taiwan move away from the ethno-nationalistic view that citizenship in Taiwan is associated with being Chinese… I would like to see more diverse kinds of Taiwanese people.”

“I think Taiwan’s future as an independent country also depends on de-linking Taiwanese identity from ‘Chinese-ness’… So as a personal act, becoming a Taiwanese citizen myself is a step in that direction,” he said.

If descendants of the Chinese diaspora who have never even visited Taiwan, whose ancestors may have never visited either (or only stopped here briefly after leaving China in the 1940s) are eligible for "ROC" nationality -- something I don't begrudge, by the way -- then it's not about that distinct Taiwanese culture. It's about race, and specifically being 'from China'. But Taiwan doesn't identify as part of China!

So, is being Taiwanese something separate from being Chinese, or not? If not, then why is the ancestral requirement paramount? If so, how does that square with what polls say about Taiwanese identity?

Creating a pathway to nationality for who have built a life in Taiwan despite their ancestry can create a foundation for a nation that exists as a civic partnership rather than an ethno-state and cement a national identity distinct from China. It helps Taiwan move away from difficult, tired and frankly outdated arguments -- ethnic nationalism is so twentieth century! (Even with places like Tibet and East Turkestan, I don't think they deserve independence because they are not Han Chinese. I think they deserve it because the Chinese government treats them like crap.)

In short, a pathway not based on bloodline contributes to a national ethos that makes sense and is consistent with the sort of country Taiwan says it wants to be. Some may fear an erosion of national identity, but out of over half a million foreign residents, only a fraction intend to stay permanently, and it's likely not all of those would go for dual nationality. In other words, those who want this pathway are already here, and for any newcomers the process would likely take around a decade: the number I hear mentioned most often is 5 years post-APRC, which itself takes at least five years. It wouldn't likely create a flood of newcomers, and I don't think Taiwanese identity is so weak that people who've stayed a decade could possibly threaten it.

The second problem with the 'monoculture' argument is that historically it just isn't true. Taiwan has always been an international crossroads, and has seen waves of settlers, colonizers and immigrants, who generally weren't welcome at first (and some of whom did great damage -- and yes, I'm looking at powerful members of the KMT diaspora). Everyone with ancestral ties to China -- that is, most of the population -- is descended from settlers. More recently, intercultural families, often with a mother from Southeast Asia, are common in Taiwan. I've been too busy with work to find good data on this, but here's a 2010 article that put the number at one in ten Taiwanese children with a foreign parent, down from one in seven in the early 2000s.

What happens to the children and grandchildren of these waves of immigrants? Honestly...they come to identify as Taiwanese. They adapt to local culture, and local culture adapts to them.

I don't ever expect to be considered 'the same' as a local, and I doubt I could fully assimilate if I wanted to. I can't deny that my race and the privilege that comes with it as well as the culture I was born into create differences that I doubt can be fully bridged. However, this is my home. Period.

There's one final point worth making: the 'social consensus' argument. As non-voters, we can't force the government to do anything, nor can we force the public to agree with this vision of Taiwan that includes us.

But do we have to? Most Taiwanese who ask me if I have citizenship are shocked to learn it's not available to me without an unconscionable sacrifice (the ability to return to care for aging family in the US should I need to). I doubt most are even aware that the quadruple standard exists. How can society be against something it doesn't even realize is an issue?

I do worry that one of the issues is a willingness to consider people like me for dual nationality, but not the people who are hurt the most by the quadruple standard -- the Southeast Asian foreign worker community. That will have to be addressed in the coming years.

The government could do something about all of this. They could end these pointless calculations of 'worthiness' based on one's job. All I can say is that I hope, in my lifetime, that they do.